Your email is being processed.

Flash Deals are limited time, limited quantity promotions, so act fast! Limited to: 1 unit of 1 flash deal product per order. If you order more than one unit or re-order or order other flash deals, you will pay our regular low price. Flash Deals are ineligible from all other promotions. 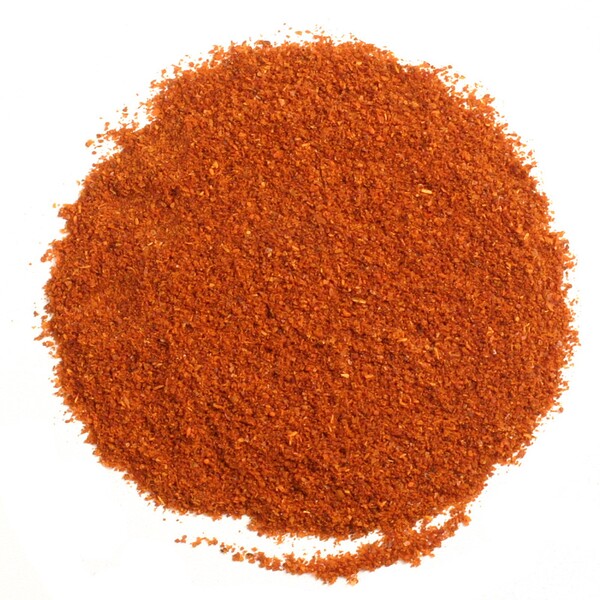 #2 in Cayenne >
Frequently Purchased Together

This colorful, ground chili pepper will turn up the heat and color in your cooking. Use it in favorite ethnic recipes, or sprinkle it on at the table whenever a dish needs extra zip.

The term "cayenne" is often used to refer to any ground pepper, but true cayenne (which takes its name from the French Guinea city of Cayenne) is actually a particular type of chili pepper--about four to 12 inches long, thin, and very pungent.

Like other chili peppers, cayenne belongs to the genus Capsicum, a member of the nightshade ( Solanaceae ) family. Cayenne--and most other hot and sweet peppers grown in the U.S.--is Capsicum annuum, while Capsicum frutescens produces the small, thin-skinned pepper from which Tabasco sauce is made. The name capsicum may have been derived from the Latin capsa for "box" (the pepper is mostly a hollow, box-like fruit), or the Greek kapto, "to bite."

Technically, chili peppers are a fruit; once dried they are correctly considered a spice.

An annual, herbaceous plant, the personality of Capsicum annuum depends a great deal on the neighborhood in which it grows up. A hot, dry environment, for example, produces the hottest chilies, while milder ones are produced in cooler, wetter climates. Even the same variety of pepper will differ, depending upon its locale.

There are several scales for measuring the hotness of chilies. What they actually measure is the capsaicin content, the crystalline, pungent substance that gives chilies their fire. The most popular scale is the Scoville Organoleptic test, which assigns a number between 0 and 300,000 heat units (the higher the number, the hotter the pepper). Cayenne typically measures between 30,000 and 90,000 heat units on the Scoville scale.

In his search for peppercorns, Columbus found "agi" pods, which the Indians used in cooking. Although technically no relation to black peppers, the Spanish called the pods "peppers," and the name stuck. Early explorers sent the seeds back to Europe, where their popularity quickly spread; soon chili peppers were commonly used to flavor bland food all over Europe. Like many cayenne lovers today, both the Edwardians and the Victorians placed chili powder shakers on their tables. Researchers are studying the pain-reducing effect of capsaicin. One theory is that capsaicin triggers pain-detecting nerves in the mouth, nose and throat, which in turn motivate the brain to release natural painkillers (endorphins). Other studies suggest that capsaicin may lower blood pressure, reduce blood clot formation, and/or prevent or heal ulcers (by stimulating the flow of digestive juices).

If you like kick in your recipes, you'll find cayenne indispensable. A few tips:
- If you're not used to cooking with chili peppers--even the ground variety--start with very small amounts. Don't use a literal "pinch," though, because you don't want to get it on your fingers! (If you do get it on your fingers, then wash them right away; don't put them near your eyes or nose!) *
- Keep in mind that dishes containing chili pepper often get hotter as they sit or are stored. So err on the side of using less. (You can always add more at the table, if you prefer a hotter dish.)
- If you get too much heat in a dish, eat or drink dairy products like milk or yogurt to neutralize the burning--capsaicin isn't water soluble, so water won't do the trick. Starches like rice or bread sometimes help, too.

Chilies can be irritating to eyes and skin; use caution when handling.

While iHerb strives to ensure the accuracy of its product images and information, some manufacturing changes to packaging and/or ingredients may be pending update on our site. Although items may occasionally ship with alternate packaging, freshness is always guaranteed. We recommend that you read labels, warnings and directions of all products before use and not rely solely on the information provided by iHerb.

Visit Manufacturer's Website
iHerb Customer
An iHerb Customer has completed a transaction, and has accepted the Terms & Conditions